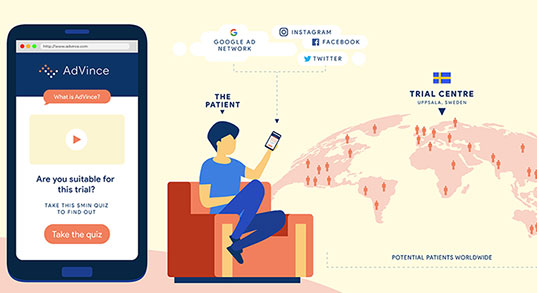 Since our last update doctors at Uppsala have continued to recruit patients to the AdVince (iCancer) trial.

Initial results in this Phase1 study have been exciting.

But in the three years since the trial started, only seven suitable patients have been recruited.

We have been working behind the scenes since last year on a solution.

We have flown out to Sweden several times, buried ourselves in research libraries and had many, detailed conversations and email exchanges with the scientists and clinical team working on AdVince, to try to find out what we can do to help.

And we think we have come up with something.

We call it The Patient Self Refer Project.

This project is supported by:

-The lead clinician on the AdVince trial, Professor Kjell Öberg;

Our work is funded by VictoryNET, the foundation set up by the widow of Vince Hamilton.  Vince Hamilton was the lead donor to the AdVince trial during our 2012/3 crowd-funding campaign.  He is the reason the compound being tested is now called AdVince.

Snail-paced progress is common in clinical trials, especially ones (such as Uppsala) testing a type of compound that has never been put into human beings before.  Caution is critical.  New interventions can kill.

But enrolment, it turns out, is also a major difficulty of clinical trials.

According to a report by the Tufts Centre for the Study of Drug Development (a leading think-tank, at Tufts University, USA) 80-90% of clinical trials fail to hit recruitment targets on time and almost one in five trials closes down because they can’t enroll enough patients.

The research, based on responses from almost 2,000 doctors and nurses in Europe and US, found that only 0.2% of physicians (that’s not a typo, that’s 1 in 500!) actively refer patients to clinical trials being held outside their own hospitals.

The problem causing poor enrolment is at heart one of communication.

These are problems that we, as communications experts, think we can solve.

Scientists and clinical researchers frequently don’t know how to build up or sustain interest in new work, or how to inform the many different, potentially interested people (from patients to advocates to other doctors) about new studies in a way that is engaging, sufficiently informative and balanced.

Why should they know how to do this?

Patients and advocates often find it difficult to evaluate scientific research, or to understand the inclusion/exclusion criteria of relevant clinical trials, because research papers and protocols are written in impenetrable jargon.

Even when patients do locate a potentially suitable trial, they can feel reluctant to recommend it to their healthcare team.

Perhaps their consultant has been unsympathetic in the past, or they fear being presumptuous.

Healthcare teams are often unaware of the newest research work that might help their patients.

They are too busy and exhausted to keep up to date with everything that’s going on.

These are problems that we, as communications experts, think we can help solve.

The Self Refer Project

Our proposed solution, which we’re calling (until we come up with a less clunky title) the Patient Self-Refer Project.

We believe this digital approach to the problem of poor enrolment on to clinical trials will help not just the work at Uppsala, but of many other clinical trials. 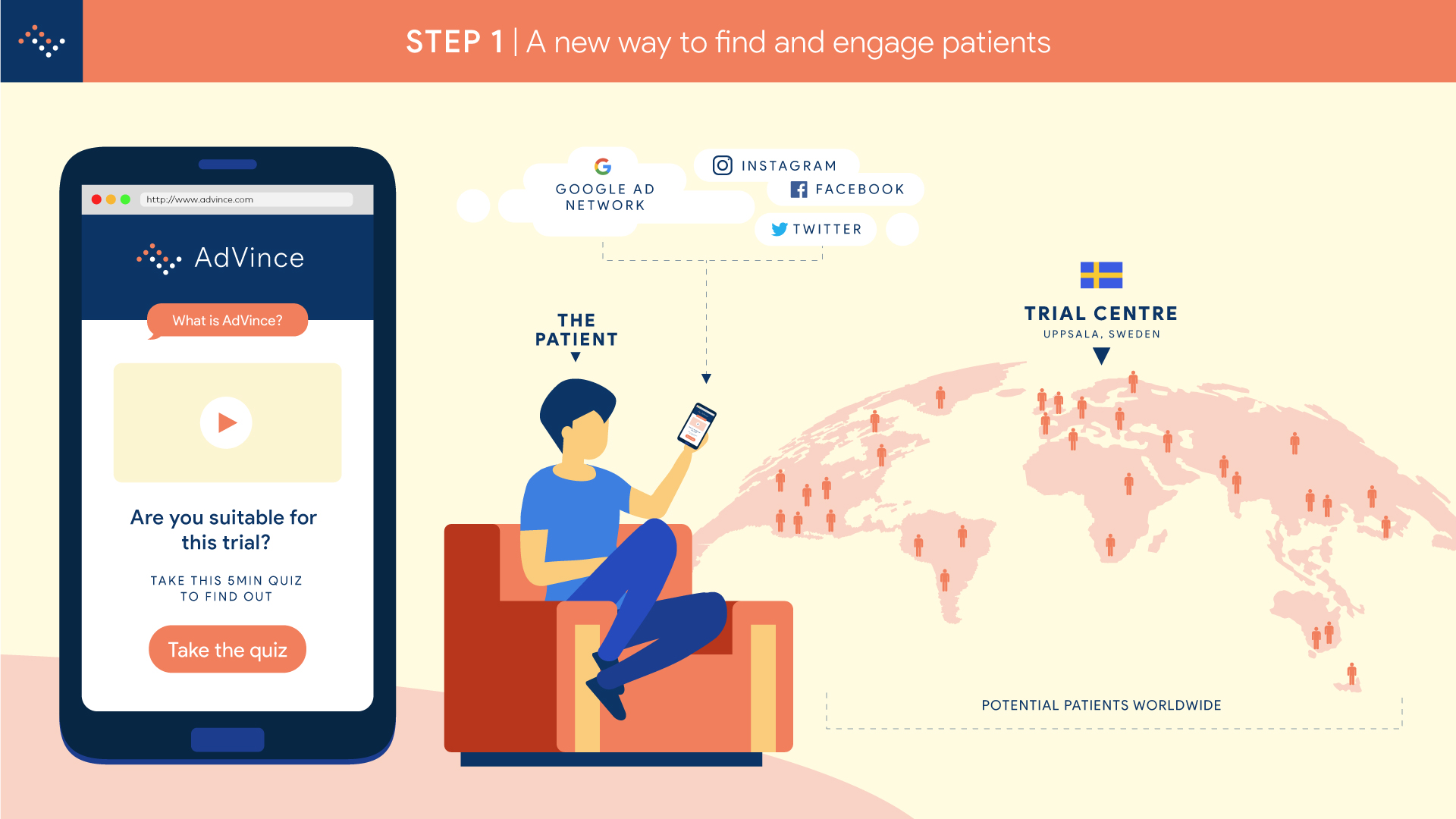 Step 1: an easy way for patients to find and engage with trials.

Step 2 will enable NET patients and their families to find out in less than five minutes, anywhere in the world and using just their mobile phone (or other device such as computer or tablet), if they are a potentially suitable candidate for the AdVince trial.

It will enable the medical and research team at Uppsala to locate and be in instant contact with potential new participants, globally.

And it will automatically inform the patient’s consultant and healthcare team about the potential match of their patient to this trial, and provide the team with all the necessary background information to make an informed judgement about whether a referral is appropriate.

The potential patient is emailed a detailed information pack that makes it as easy as booking an AirBNB to see and understand what taking part in the trial will involve.

The interested parties involved are automatically coordinated in a referral so that there will be no lapses in communication.

To join the AdVince trial, a patient still has to meet all the inclusion criteria and be accepted by the lead clinician, Professor Kjell Öberg.

Our solution simply improves the traditional mechanism by tapping into the nimbleness and drive of patient self-interest and automating many of the processes.

We need your views

Together, we made the AdVince trial possible.

The Self-Refer Project is another part of the global movement to revolutionise the way ordinary people can engage in and direct their healthcare.

It will give patients the power and means to effect medical change, by kick-starting the referral process themselves.

It is important that we include the views of patients, researchers and healthcare teams to ensure this new tool is easy to use and as effective and game-changing as we believe it can be.

Help us design this tool by giving us your views in this 5 minute survey.

Warning: count(): Parameter must be an array or an object that implements Countable in /homepages/4/d222423650/htdocs/wordpressicancer/Wordpress/wordpress/wp-includes/class-wp-comment-query.php on line 405

Donate from the UK

You can still donate to the brilliant work the team are doing at Uppsala University.

You can donate with a credit card or a PayPal account using the button below. Your money is sent directly to Uppsala University.